There’s the old sports cliche’, it’s not about getting knocked down, it’s how you get off the mat. I’d say I got off the mat rather slowly and deliberately after shredding my left hip in the Napa Valley Marathon last March. It took nearly four weeks after the marathon before I tried running again, and that just a slow hobble of a lap around a track for a grand total of 1/4 mile.  From there, I slowly, and at times painfully, built up from there to a half mile, then one mile, then two miles, and finally 3-4 miles started feeling pretty manageable. I’m not sure which were tougher: Those 20 miler training runs for the marathon, or those 3 mile runs on a day my left hip could only hold together for about a mile.

I was already signed for Bay to Breakers since last fall, so recovering enough to tackle the mid-May 12 kilometer race was the goal.  Day after day of careful runs and twisting myself into bunch of odd, awkward positions to stretch and strengthen the hip, I finally got to the point of completing 8 mile run with hip holding up pretty well. So was pretty confident I could handle whatever Bay to Breakers could throw at me.

And handle it I did. Bay to Breaker is one big San Francisco-themed mob scene of a race, a flow of humanity from the east side of the city to the western edge of Golden Gate Park. The idea was to just go with that flow. I had a modest goal of finishing under 7:30 per mile pace, a little less modest goal of finishing under 7:15 per mile pace, but basically, I just wanted to put in a strong effort for 7.45 miles. At the top of Hayes Hill, a check of my watch had me at just over 7:30 pace at three miles and I wasn’t feeling so good. Not an encouraging sign, but I just kept working on getting my knees up, found a second wind, and started zipping through the latter downhill miles in sub-7:00 minute pace, finishing in 52:45 with little soreness in my hip the whole way. That’s something like 7:04 per mile pace, faster than I figured to do. I’ll take it.

Next race up, Santa Cruz’s Wharf to Wharf on the fourth Sunday of July. I’ll leave you with a few pictures from Bay to Breakers I snapped with my iPhone. 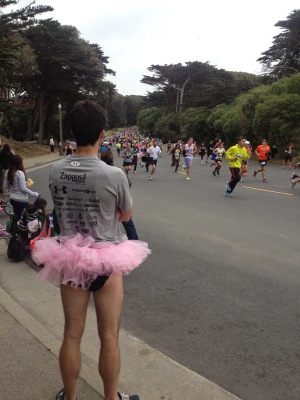 The most striking thing to me about a race like Bay to Breakers is the huge flow of humanity cascading from start to finish.  I’m afraid the iPhone camera I carried during the race really couldn’t capture the immense mass of nearly 30,000 people celebrating the event in their own way over the 12 kilometers.   It’s a race the city of San Francisco has embraced, that probably couldn’t exist anywhere else in this country. These photos don’t give the Bay to Breakers experience justice, but hope you will enjoy them all the same.  One of them has been slightly altered for reasons that should be obvious. 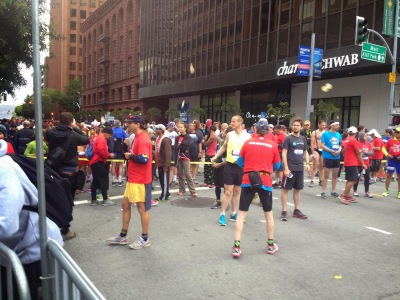 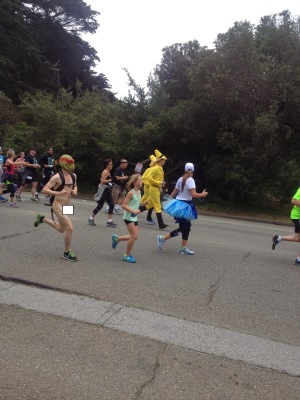 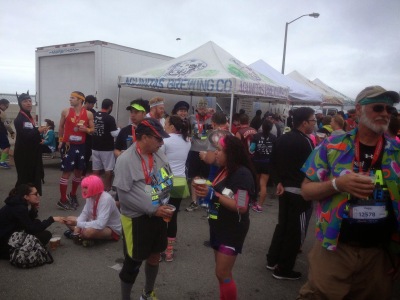 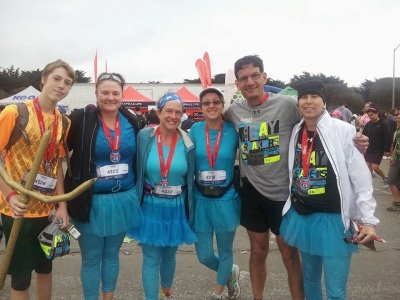 In the past, I have not had the kindest things to say about the Bay to Beakers race held each May in San Francisco.  From afar, Bay to Breakers always seemed like some huge mob scene,  a mass of San Francisco style exhibitionism that had over taken an event which once upon a time had been a running race. But as I often say, “Don’t criticize what you don’t understand”.   So when a friend asked my wife and I to join her for the 2014 running of Bay to Breakers, I agreed.  I figured I should at least try to understand this race for myself so decided to finally experience it once and for all.

And yes, I had a blast.  The crowds were full of an enthusiastic energy all the runners easily fed off of. It certainly got me going, as I “high fived” a few spectators along the way.   Bay to Breakers actually felt like a race, not some big crazy party drowning out the running part.   There’s something special and hallowed about running the historic race course that’s been run since 1912, which has emerged as the site of one of San Francisco’s major cultural events. Whatever Bay to Breakers was going to throw at me, I was going to do my best to simply embrace that moment.

As for the course itself, it was an interesting challenge.  The first 2 1/2 miles were mostly flat before hitting the Hayes Street Hill, a series of steep uphills for a few blocks before the course meanders downhill for the last 4 1/2 miles, finishing at the western edge of Golden Gate Park.  My goal was to hit 6:10-6:15 pace and to take it easy for the first couple miles to save something for Hayes Street Hill, and then attack on the downhill.

Of course, you know how that first “conservative mile” went.  I busted it out at 5:55.  Putting on the brakes bit over the second mile, I struggled up the Hayes Street Hill and was getting pretty worried I was in a lot of trouble as I slowly worked it up the hill as other runners moved past me.  But I pulled myself together, got a good pace going through Golden Gate Park working the downhills and finished in 47:09 over the 12 kilometer distance (6:20 per mile pace), good for 199th overall and 9th in the 45-49 male age group.

If you ask me, that calls for a post-race beer.

It’s that time of year to decide the races I’m going to do, and start training for them all.  It’s
going to be an interesting spring racing season, that’s for sure.

First up is the Double Road Race San Jose on February 22nd.  The Double Road Race Series puts a twist on the usual road race by creating a half-time of sorts in 15 kilometers of total running.   It starts with a 10 kilometer race, and then one hour and forty-five minutes after the start of the 10 k, everybody starts another five kilometer race.  The hour and forty-five minutes gives everyone about an hour of recovery from the 10 k before the 5 k starts.    The times of the 10 and 5 k are added up and the person with the lower overall time wins.  They promise this “Recovery Zone” of massage and other recovery aids during the break, which sounds like a great place for plenty of sponsorship opportunities.  Reminds of the track meets I did in high school where I had to recover from the 2 mile run at the beginning of the meet to run the mile near the meet’s conclusion.  My trick back in the day:  Rubbing cold water over my legs.  So I’m looking forward to using the old cold water trick and to run down a few unsuspecting folks in the 5 k leg.

Finally, if you can’t beat ’em you might as well join ’em, I am indeed running Bay to Breakers on May 18th.  In the past, I have written things less than totally complimentary about this race.  However, a bunch of friends have signed up for it, so I added my name to the list and get to run this historic race for myself.  Rumor has our group will have a dress up theme of Alice and Wonderland so maybe I’ll be traipsing around looking like the Mad Hatter, Cheshire Cat, or even Alice herself.  But I wouldn’t bet too heavily on it.  I just don’t want to lose to that guy in that damn pick gorilla suit!

Whatever happens, it should be a fun and challenging spring of racing, and I’m looking forward to it.  Best of luck to all for the spring racing season.

This coming May 18th, I’ll be running the Miles for Migraines 10k rather than Bay to Breakers the following day.  Running Bay to Breakers is worse than suffering a migraine.  In fact, I’d rather have my spleen removed without anesthesia than run Bay to Breakers.

Can you tell I’m tired of answering questions from well meaning non-runners asking “Are you running Bay to Breakers?”.  Like many runners, I avoid this race like the plague.   Now I must admit never having run Bay to Breakers myself.   But everything I’ve heard indicates it’s a huge mob of San Francisco-style exhibitionism and excess with some running thrown in for good measure.  No thank you.

Let me be clear, I’m not against the Bay to Breakers.  It’s just not for me. If you’re doing Bay to Breakers, knock yourself out.   You’ll probably have a much better time without old school curmudgeons like me around, anyway.

Lots of runners like to run races to, you know, like actually run.  There’s a liberation in going out and running free from the chaos of urban life.  There’s a sense of accomplishment in preparing for the challenge and testing yourself on race day.   Many runners have no interest missing out on these experiences stuck in a mob behind a bunch of drunken streakers.  And smaller races like Miles for Migraines also contain a certain familiarity and camaraderie mega-races like Bay to Breakers simply can’t capture.

So instead of Bay to Breakers, I’ll be running an actual race that weekend.  Have fun without me!